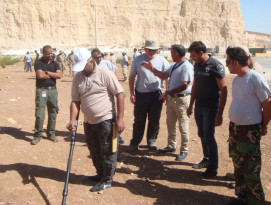 Under the Islamic State group, Mosul has been transformed into an urban minefield littered with explosives and traps meant to bait troops and technicians into setting them off. Once Iraqi forces retake Mosul from the militants that have held it since 2014, they will have to contend with the city itself.

Valerie Insinna, from Defense News reports on how ISSEE has been working with NATO to train Officers from Iraq to deal with IEDs left by Islamic State Group

The US-led coalition and Iraqi military are hurtling toward a final assault on Mosul, which Iraqi Prime Minister Haider al-Abadi has said will occur by the end of the year. But NATO is concerned that, when the dust settles, the civilian population may return to an incredibly dangerous area saturated with improvised explosive devices (IED).

“If you look at Daesh’s tactics, the way they defend towns is with 50 to 200 snipers and ten thousand IEDs and booby traps,” a NATO official said, using the Arabic alternative for the Islamic State group. “Everything is booby trapped. Children’s toys, kitchen pots, the refrigerator, dead bodies, everything.”

This month NATO began its second counter-IED course aimed at teaching Iraqi Army and Ministry of Interior officers how to disrupt explosive devices in an urban, humanitarian context. The treaty organization invited Defense News to Jordan to watch exercises and speak with some of the incoming students.

“In a street about 100 meters long, there will be more than 30 IEDS planted there,” said one new student, a 29-year-old Ministry of Interior officer from Basra province who has been working as a counter-IED expert since 2012. During the officer’s time working in Anbar, he helped disrupt 300 IEDs, including those in houses and vehicles. Because he already came in as an expert, his focus will be working with instructors to enhance his skills and exchange information.

Most of the officers currently going through the program are less experienced, said Phil Yeaman, an instructor from ISSEE, a UK-based explosives training firm that contracted with NATO to teach Iraqi officers how to disrupt IEDs.

“I firmly believe — and I’m not criticizing them — but I firmly believe that the reason for the high level of casualties among their specialists [is] they have the principles … [but] the techniques are not what we’d expect from a trained specialist,” Yeaman said.

“They are extremely conscientious. They are dedicated to the belief that they are defeating Daesh by improving the lot of their brothers, their co-mates, their fellow citizens,” he added. “The skill sets of the Iraqis — they have the fundamentals, they have the principles. What we’ve tried to do is develop that into a more appropriate end result.”

There are currently 30 Ministry of Interior and Army officers enrolled in the NATO program, two of which have already passed the course and are now assistant instructors honing their training skills. With ISSEE’s help, NATO hopes to produce 90 counter-IED operators by the end of the year.